First ball of the Cricket match, the bowler ran long on the mud pitch. The ten year old batsman, popular hitter, [A boundary or Sixer shot is what is termed hitting, perhaps in the cricket-pedia] waited steady with bat held tight in hands  for first ball. A full swing, full motion, what a sweep and yes! He had hit!! How's That!!

There were loud noises all around, most boys fled, some towards him and some ran hither and thither. There was more of a commotion there. The boys had been playing in open ground with boundaries stretching on to the roads connecting to local residences.The ball was not the lucky one to be kissed hard and sent for a tour in the open stadium , call it sixer. The unlucky one was a limping old man who emerged out from no where and was knocked out by the batsman in full swing. In the ears of the astonished boy rang not loud applauds but the moaning grunt of the old grumpy man. Old man was attended well by the boys until he managed to reach home. But what about the batsman?  Needless to say, he had fled with heart in his mouth.

The unity among the boys protected the true act of honour of the boy. The hitter had made a big but the wrong hit. Alas. Few days and  his friends updated him on the old man's health. Each time his friends took turns to go to his house & inform him pieces of news, the boy's nightmares found different horrific stories. "No chance, old man is not out of bed, bhai yeh tho gaya, iska ticket ho gaya".

It was that cursed evening when a friend came puffing and panting into the boy's house and in bated breath narrated his news in bits of words. Half eaten sentences. But the boy got the point.
The old man was dead.

Because the hit was on the head, and remember it was a hitting-shot. So the time had come for confession. The boy gathering all his guts revealed the story to his father. His father listened to him as he chewed his paan, spitting in between and also smiling now and then. Boy's nerves were calming down upon confiding and realizing that the father understood him and would make all efforts to help him. It was not intentional after all. It was a mistake. Boys were just playing. Soon came the shock instead.

"Alright, now you can continue to play cricket-but carefully.  As for the old man, he is hale hearty and fine"- told his father.
So the nightmare had to end. Pals played notorious prank on the poor boy including his dad in the melodrama. Like the railway engine that halts moments later after you pull the chain, all the feverish pains of the boy were more jolted and his nerves did not soothe or agree to his ears, or the brain that was manipulating the information received. Few anxious days spent speculating excuses out of false alarm of an unintentional murder he had supposedly committed, seemed to hook on to him. The pain dint budge into a laughter in spite of continual convincing from pals and father. Boy felt itchy. Brains took time to waive off the fear to replace and believe real truth. Truth had changed for him, yet so hard to believe. The old man was not dead.

I would sing this number if I were there then instead of today. That boy, today my man, narrated this, 12 years after married life first time. After ages I enjoyed the popular tonic ROFL, rolling on the carpet holding tight onto my tummy and laughing like a child. I enjoyed. Once  a devilish laugh, once softly, once muffling. Discovering a secret of his childhood that had  frightened him to hide under his skin, proclaim a self exile, or may be to vanish like a puff of smoke of Aladdin's lamp. I really had to admit how on earth did he not mention it to me all these years.

Those golden days where kids played on the roads and the open grounds is definitely a rare scene today. Gone are the days when family played cricket on streets, shared little giggles and laughter. Broke neighbour's window but ended up making friends with them. We now have sophisticated grounds. Yes it is more disciplined and safe. Today we sit on our expensive couch and watch IPL on television. Also our kids enjoy this.
But those little fun moments definitely are left out in those open grounds.
Email ThisBlogThis!Share to TwitterShare to FacebookShare to Pinterest
Labels: humour 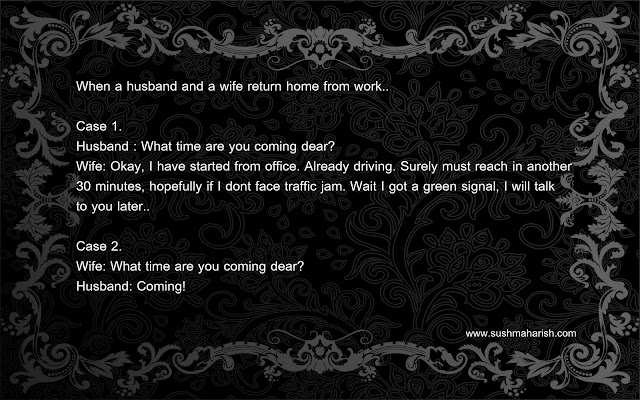 Happy Birthday mom. For your birthday, we are taking you to ……
The mall? Dinner? Aqua Park?
No it’s a big surprise.
Where?
Jordan ………Joooorrrdan... finally!
Surprised me, my daughter. Surely it was a lovely gift. First the 99 wishes on FB and  now the hundredth being the surprise trip to my dream vacation, planned by the dad daughter duo.

My mind had begun floating, visualising  floating in the Dead Sea.

Visiting the home town of the Dead Sea was different excitement. We packed  on the 22nd night and flew on 23rd morning of October 2015. Like always my one year old son had thrown a chaos in the flight. We had to survive his tantrums in the four hours flight, hence we had to check in online on  Qatar Airways Web Check in  to save more time and to book my usual bassinet seat for the baby. Travel with naughty little one was big time adventure by itself. Fiddling like desert penguins, we safely landed in  Amman the capital city of Jordan.

From the crabby  taxi, where my son made friends with our tour guide to a luxurious hotel where we made friends with an Indian family from Oman. We decided to rest entire day and explore the closest malls or parks in evening. We had to sleep early for a big day, the next day. It was an hour's journey to the Dead Sea.

The dead sea was a blast. Imagine no waves in the sea. Imagine you lie down and your body does not sink but floats like a log. A log. You try to feel like a dead body in the dead sea. This sea showed what a good friend water was to my water phobic hubby. He also manged to get the dead sea mud on him which is good for skin. We had a photo shoot of each one of us floating, while, the cross eyed looks by my son from a distance alerted us to give a break to water adventure. Little children are banned entry into water as it was rich in oil
which makes it possible to reduce the gravity. Oh! You get off water and an oily you  comes out. The water park made up is for kids entertainment as alternative. After a mesmerizing day in the sea without sinking or carried away by no waves, we finally had to move on.

Petra City was next in the list. En route we did cover random places. Mount Nebo (In connection with Moses mentioned in the bible) was one. Madaba was next. Where we relished a lunch that I still cant stop polishing. A special dish called the upside down in other words it a huge stove full of Arabic Biryani with a bunch of different veggies in it.

After lunch we traveled some more to a beautiful place in the middle of no where. A museum / mini shopping complex, called Foundation Handicrafts. We bought a lot of dead sea products and a stoned bracelet for my daughter.
Soon, a little after sunset we checked into a five star in Petra. We woke up  to a breath taking sunrise next morning. Multicoloured mountains! Never witnessed this beauty before. 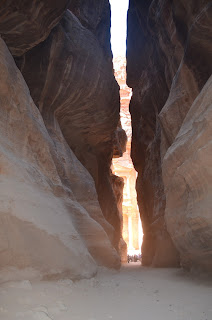 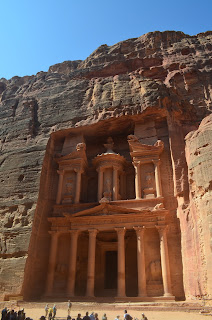 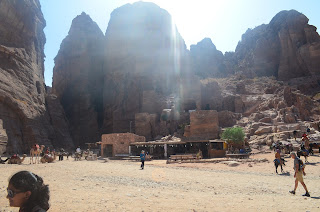 The five star buffet breakfast served as fuel for the tough day to a long car journey to the most awaited "Rock City".

The tour guide had filled us completely with a lot of information, that we breathed and even burped history.

The excavations in this city had  let to stories as old as 2000 BCand to the Romans in early 100 AD. Main religion of the inhabitant -Nabataens worshiped Arab Gods and goddesses. but not Islamic. The tombs, the water ways, the treasury, the stadium of those times. were main attraction spots. Two to three hours of walk among these rocks and then we retired in the rooms. 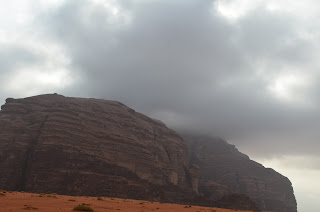 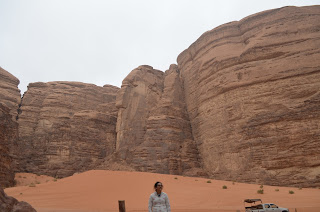 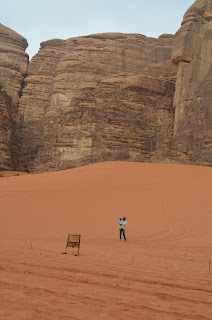 That very afternoon we had check out to reach our next destination  Wadi rum . The Sands.
It was known for its popular sunset with rocks and sands building up the sun's beauty,  but we missed it , due to heavy  rains.  However most thrilling time was the golden chance to spend the shivery night in a tent house that too with WiFi! Following morning were spent travelling across the sands in an open gypsy discovering the rock city, its sands while the clouds danced on our heads.
Next morning we headed to  the city Amman which was a last stop and the last strip of my gift wrap. The tour in the hill city had more history to unearth. The Roman pillars of Hercules, temples and tombs, Panoramic view of the city built of white stone, museum displaying the antiques. Eye popping moment was witnessing the 6000 capacity stone stadium of the Roman times intact. She was a beauty.

That night ended the gift session of the Yatra (holiday). From the "present" to memories that would soon become a past a glorious past. A perfect holiday. Mesmerizing experiences. We packed and left the rainy rock city to the airport on the 28th night of October. One different vacation away from hustle bustle of city chaos. The unique experience from day 1 to  day 5 . 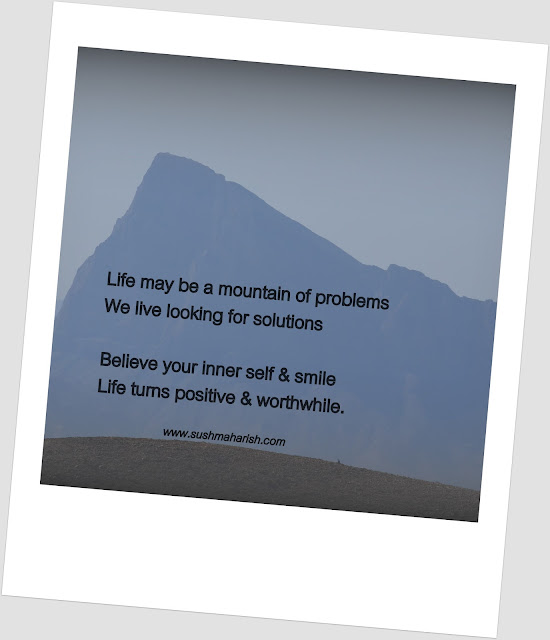