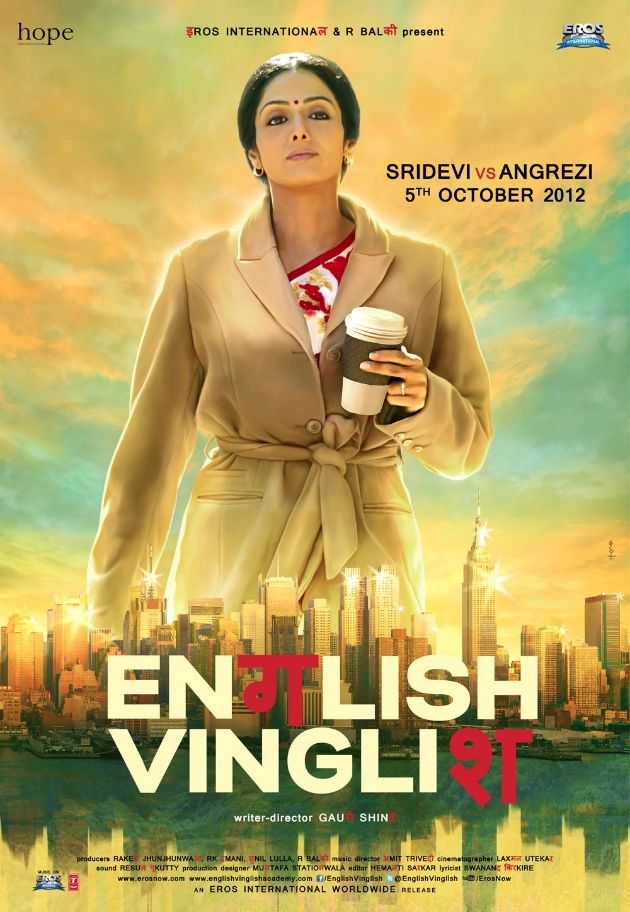 The very first few minutes of the movie's beginning will drown you deep down into the character of "Shashi" a beautiful Maharashtrian lady, the happy wife, DIL (Daughter In Law) and a SAHM(Stay At Home Mother). Expert hands on cooking and her only cherished hobby as it is, she runs small scale home based catering. Popular for her fabulous "laddoos" yet maintains a slim waist line herself. Almost frequent jibes from husband and child for poor English knowledge has almost let her self esteem down yet a positive vibrating cheerful face. She later on happens to visit New York where she bumps into English classes. The "Saaashi" that is seen on the Manhattan streets is the one who thoroughly comes out evolved with her new outlook.  If gaining her self respect form her dear ones meant just about learning an foreign language,and foreign culture, she challenges it and welcomes a new self.

While one can laugh non stop, smile vigorously as you enjoy the movie on screen, some might also be shedding silent tears. Blame it on SriDevi who comes out flying colours in her role as Shashi, bringing out all emotions so very naturally, flaunting eye catchy, colorful gorgeous Saree's.

Gauri Shinde has rightly brought in SriDevi for the main role who justifies the right expressions, right gestures, all right for the "Shashi" that one will see on screen. All the other characters have filled life proportionately and hats off to Gauri Shinde who created this epic which seems to relate to life and times of her family too.

One can smell the coffee that Shashi makes in the morning. One can relate somewhere to her through the feelings that are cast by her eyes. That positive wife who utters sober questions to her husband whom she sees hugging a lady colleague. That mother who swallows up lumps of hurt self esteem while the father daughter duo laugh at her over her inadequate lessons on the "English" language conversations, or when the daughter feels ashamed her non-English speaking mother accompanying her to a PTM at school. A prefect friend is what she finds in her MIL(Mother In Law). Seems like this is where the "Maharasthrian" feature so likely rules. Featuring a typical MIL with "Laliatha Pawar" or "Sushma Seth  " would have lost that touch! Gauri Shinde triumphed in here.

As her only widowed sister gets her daughter married off in New York is when Shashi travels alone well in advance for preparations. A heartbreaking mess up in a coffee shop after her struggle to order those "Angrezonka khana"(Hindi term meaning food of the Americans) that runs down pearls of tears down her cheeks, she find fantasy for some English-class, crash course. It took a French male admirer, a classmate, almost call him her fan, to induce her self confidence into her. Yet reciprocating was Shashi's mind speaking aloud it too, about him  uttering beautiful things about her to make her feel good. After all SAHM are supposed to be "living" too. Aren't they? With some multi-national classmates and gay teacher, Shashi finds special place for herself among all these as "Shashi madam". And become the "favourite student Saaashi" of her "David Sir" who one fine day under influence of her "pastha-shasta; English vinglish", utters "no trying vying". There is no escape for laughs here. Mind you the crash course on English is a pure secret for her and she can not breathe about it for the fear of more negatively inspired fun poked at her.

The linguistic expressions, the gestures transforming from true Indian to a mild mixture of "English".  The Saashi , as the "Gore(white people as termed in Hindi)" called her was getting infringed into the simple, Indian Bahu(Hindi term for Daughter In Law) with self confidence buried in the sarcastic comments of her husband and kids.
Cooking, the only favourite subject apparently upturned as she triumphs in a "learn English in 4 weeks class" in the hep Manhattan street. The independent Shashi grew right there transforming into the "Saashi". The guest appearance of Amitab Bachchan on board the NY flight as a helpful co passenger of Shashi was the only character that was little over done.

The movie ends with a scene of Shashi's husband giving her the looks of that realized man with pride too.


And if someone has still not watched English-Vinglish wondering "its not their type", its time up. The movie is bit old now, change your type- You will come out cheerful.
---------------------------------------------------------------------------------------
I had some goose bumps while I found myself relating to Shashi in one way as I had traveled my "1st  Phoren (Word "Foreign" as pronounced in Hindi) -visit" with my 2 year old and some 10 kg baggage. As the silly Bangalore flight delayed and my next connecting  flight had abandoned me in the tiny little Bahrain airport to find myself juggle with my hand bag for some newer currency. The names of food seemed barely familiar. And courtesy airport officials politely screwed me by offering some "Biryani" and would I feed this to my 2 year old? Teekha Biryani?  No-Vag mam is what an "Anna"(A South Indian- Madrasi for you is called Anna)  official clarified to me. Eat your chicken or die hungry! is what he unofficially meant. Apr business class passenger treatment. waah...nimmajji (YES- A sweet Kannada abusive term) and few other frustrations were what I uttered by myself. And for exchanging currency I had to drop out some tinkering toys off my bag. Excuse me, no I did not find any French admirer nor any Arab!!
Cheers,
Sush