Little girls are father's darlings.
The time buzzer rings.
Her footsteps mature into bigger, following that of father. 28 years apart then will seem a newer picture than the one today where the tiny toes stretch to reach her dads....

﻿Dad daughter race,
Dad fears.  Soon the daughter outgrows his trace,
She has to grow up independent and bold,
As the father grows old.

Cherished moments of today are going to be supports for tomorrow. Little daughters chatters will be future verses to rember and sing........ 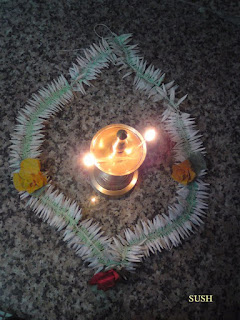 It all began with just  a piece of news. A sad demise, that can shake you off. Why is "death" a fact so hard to gulp down.Why is it like a dagger at your heart leaving one scar on your mind?

My eyes dint like a wink of sleep. Every time the eyes closed his face gleamed in the minds eye. An unbearable restlessness. Thoughts rushing in like roaring waves. Accumulation of numerous memories, cherished time spent with him, refused to leave the mind. Now and then would the mind say oh-no, oh why! Alas. It was the end of his journey of life.
It is a hard fact. The moment filled in me with deep grief never to cease. Ears dint want to hear anything more. Appetite was long forgotten. Air around seemed so dull. Life around you seemed like a reel of slow motion. Deep mourning sadness creeping upon constantly and endlessly....Rotation of thoughts continued. Had to pause after all, it was not the end. It is another beginning for the rest of us without him.

He lived his life neatly for these 90 years. Well organised and disciplined person as he was known for.

Whether you will turn into a star twinkling in the sky, or whether you will be another fairy in the heaven; I will always miss you on this earth; BUT you will remain alive in my hearts dear "ajju". All that I can say is, what I am today is majorly attributed to my Grandpa dear- you taught me discipline you taught me love, you made me laugh. You shared my dreams. You were the one from whom I inherited not just genes but the humanity.

Peace be with you, wherever you are.

It is news all over in media about Baby Afreen's brutal death. After writing my article on "Girl Child's Agony" last month which generalized the cursed disease of "boy-worship" in India this news came in like a dirty example. Own father has been worst than an animal to harm his own infant daughter to death for the reason of her being born female.
So we prove each day how exploited is the freedom offered to the citizen of democratic country  We have a freedom of action to such an devilish extent?
Every citizen is expected to have the head balanced on the shoulders. An incident like this is awaited to happen again for "law" and capital punishment to be discussed against such devils? There was never love. Now law will be discussed  again till hope not another repeating dirty incident crops up and flares up agitation amongst the common man.
It's appearing like a fad here that a girl child has been treated so inhumanly and tortured to the this extent that a woman loses a faith on herself to feel depressed of herself being another woman in this very country that  she so much loves.
Meri desh ki dharthi.............kya rang dikhayee.
------------------------------------------------------------------------------------------------------------
"Super woman you are" came in a huge package of complement for me [read him here]. Ask him why?. Let me take the privilege of explaining that too, because I accept this as a honest compliment from my intellectual friend who is boy in may be late 20's but with ideas that could rule. Being a mother, a wife, a working woman, writing, plus doing post gradation course at this phase/age of life  is what seems like tough balancing act; his honest compliment sprung into me like Spirulina and this jet of a post shot out of my mind in a zoom. Now was this enough as a super woman ?  A clapper-clawed superwoman flying all over spying on the devils like the "boy baby-worshipers" ; perhaps I would give an attempt trying out my hands on them. If that were the "heroic" deeds that we all watch in movies when there is no law in aid to such hapless situation.
Would my voice ever echo to the deadliest corners of the devil minds of the boy-worshiper's in any nook of India?  Well, if not, attest this post should do some prompting.

I/we can react, revolt and write! Alas, cant change things.  Though could we not spread love and smile as a tiny attempt? How different is each one of us? And what is the best that we are offering our society from within our best? At least a smile per day on your neighbour's face?
How different are we to our progeny? The same old mother "you better listen to me or you will...." OR was it easier if you listened perhaps to your child who tells you that he/she wants to find a good moral out of any story he/she reads and not just reads the ready made moral story books? Count me in here. I did listen and it was worth.
Such love, moral, that inculcates socio-ethical decency as part of education for a human.
------------------------------------------------------------------------------------------------------------
Superwoman wants to actually sign off: Ya there are many social issues that can be discussed.
Turning onto the super weather of the past few months, bizarre Doha winter is not something to miss out.
Nice winter of Doha tuned into a queer naughty winter by March. Doha air started cooling down by October, to a cold November and thereby the cozy winter has been casting its spell luring  Gulfi's to yearn for this season of all. Just as it seemed like it was time to wriggle out of snugging huge comforters, get the air conditioners serviced, came the torrent of rains. Well yes torrent was a little too much for the decent rains that this desert sees. Yet sang the tiny pool of water on roads, dripping leaves from trees, dirty cars, wet cats hiding in your garage, or the birds hiding in your balcony, the song of a epic of the era.  Stunning weather of the year award goes to month March-2012 at Doha. After the ironic 2020 Olympics cream award to Qatar things seriously seemed to churn into strange out here. Rain God apparently heard all the prayers and showered some more sympathy drops this year onto the robots dwelling in this desert. I specifically relate this life to a robots for the deadly reason of absenteeism of a "good" social life that we otherwise cherish from motherland.
Meri desh ki dharthi....

Sushma's Page presents the first guest post today.
An agitated alumnus of IIT -Chennai reacts on the new rule of "Moral Policing" on the Hostel-Day of IIT [Indian Institute of Technology] protesting against it. An "open door policing" for the Hostel Night is ridiculous and not welcome at all.  Sincere thanks to Mr. Harish for his views in here especially in the hustle bustle of rushing home[India] for an emergency of losing a best friend of his, as a victim of the monster called cancer today. But the very mention of the new rule of  IIT-agitated him and provoked to pen down his piece of mind.
[For those who do not know about"Hostel Night- It is a occasion where any visitor is allowed to stay in student's room for that night]

Gist:
Studying in the prestigious IIT -Madras [In late 1990's as I pursued my Master's of Technology] was, and is a pride for me.Today being an Product of IIT- it has a great role in molding me .

It was once in a year that the Hostel Day was being celebrated. It was a The Day for the students, for some fun and freedom a-midst privacy. It was yet another day like a college day or a Birthday Party for me. BUT -The difference was, for one day, we spent best times with our near and dear ones in the closed rooms where we otherwise lived with only books and books and that's all. It was like another celebration for us. BUT unique and peaceful.
For gods sake policing is not required for this day.

Argument:
At the stage of under graduation[above 18] and Post Graduation, the students can clearly distinguish sex and relationships. One day of fun in hostel is not justified for having premarital relations. This is one special day for everyone in professional life.
If it were a hostel of teenagers it would have been a different matter  Yes I mean it. This is nothing but  a bare truth.
If Management is trying to keep law and order in place, this rule will not help them much. Simple. Instead they can organise open get together which is commonly practiced. But it does not provide the space, the privacy that the professionals rightfully require in maintaining their mental peace who otherwise spent most times in those rooms with books and machines.

Conclusion: It is a Unique system of IIT- Let's not change it in name of law and order. I will request with stamped foot. Go back. Keep the original fame of IIT intact. IIT-an icon of pride for me and thousands of more professionals born out of there.